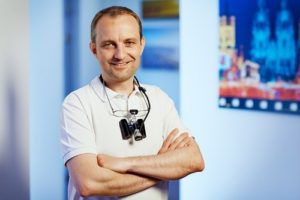 Dr. Hagner graduated from the Dental Faculty of Bonn in 2003. Since 2010, he has achieved many post graduations in Periodontics and Implantology. From 2007 to 2010 he has been Researcher at the Polyclinic for periodontics, dentistry and preventive dentistry at the University of Bonn. Since 2011 Dr. Hagner has a practice in Germany dedicated to comprehensive dentistry. Beside his practice activities, he is a frequent speaker and lecturer in seminars and congresses. Dr.Hagner is also very active  as author or co-author of scientific national and international publications.

Tooth-splinting procedure is demonstrated on tooth 26 which was root amputated during resective surgical therapy in a patient with generalised severe chronic periodontitis and type II diabetes.

The first x-ray of the teeth shows the situation after anti-infective therapy and prior to endodontic treatment. The diagnosis was primary periodontal lesion with secondary endodontic involvement, with furcation defect degree III, which could be probed distally and vestibulary.

The second x-ray of the teeth shows the x-ray examination under a rubber dam during the endodontic treatment of tooth 26.

The third x-ray shows tooth 26 with the completed filling of the mesiovestibular and palatinal root canal. The distovestibular root canal contains a medicinal insert in form of calcium hydroxide. The pulp chamber and the upper part of the root canal are filled with a composite material, which also forms the cover filling.
The fourth x-ray image shows tooth 26 after root resection of the distal and palatinal root. During surgery it was displayed that the grade III furcation continued through the mesiopalatinal area. The palatinal root could no longer be preserved.
The fifth x-ray image shows tooth 26 splinted with F-Splint-Aid Slim at teeth 25 and 27. 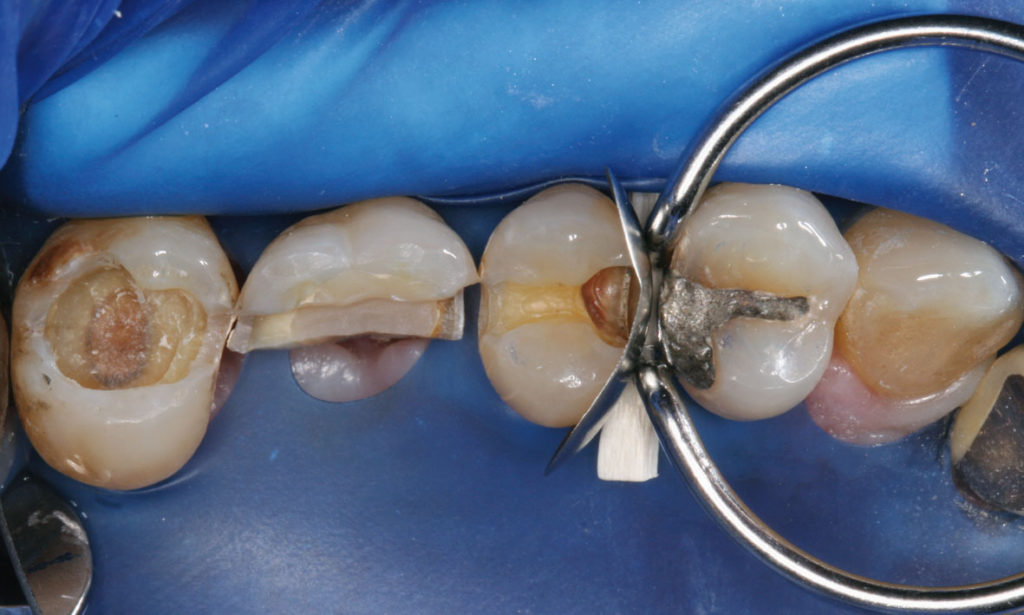 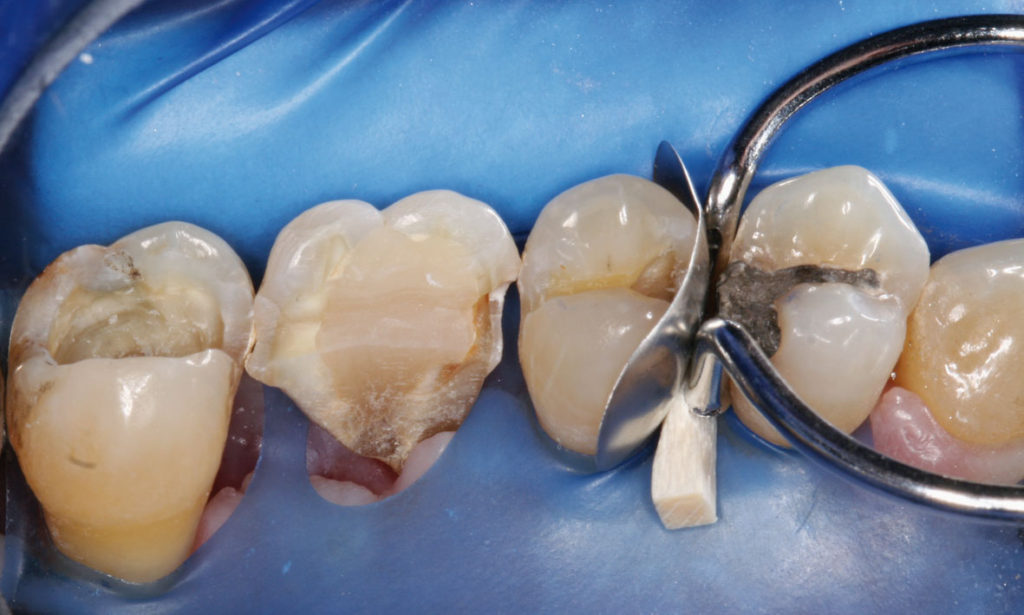 3: Palatinal view of the excavated situation of teeth 25-27. 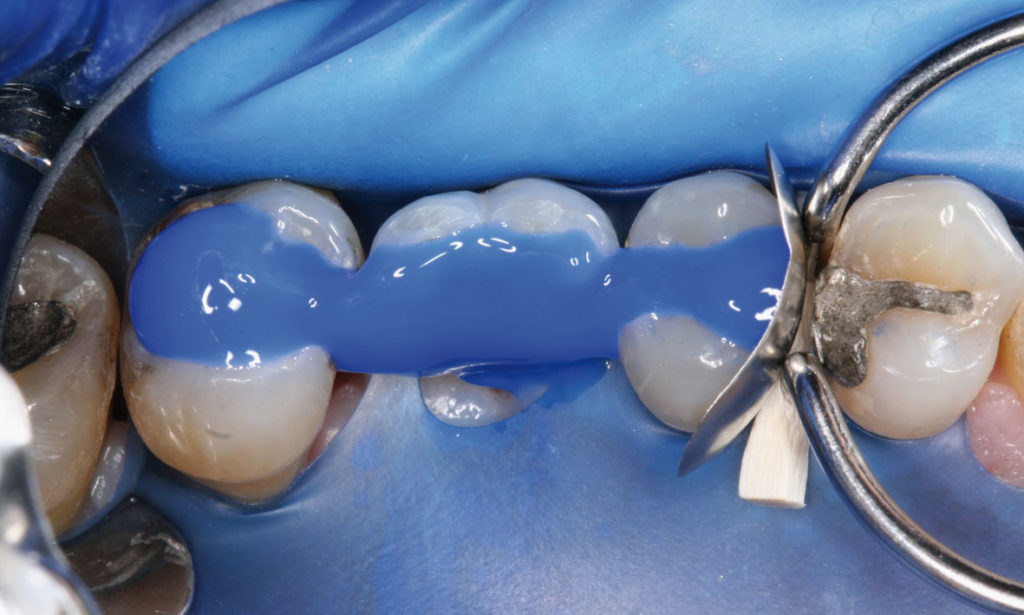 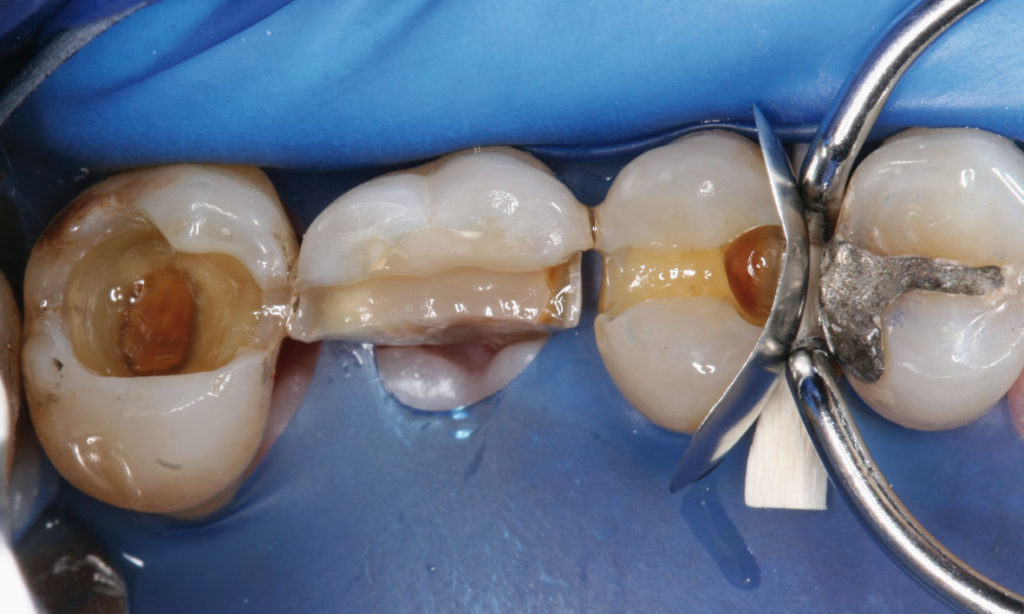 5: Conditioned cavities of teeth 25-27 with bonding.

6. Built-up mesial ridge of tooth 25 after removal of the sectional matrix as well as underfilling with flow composite at tooth 27. 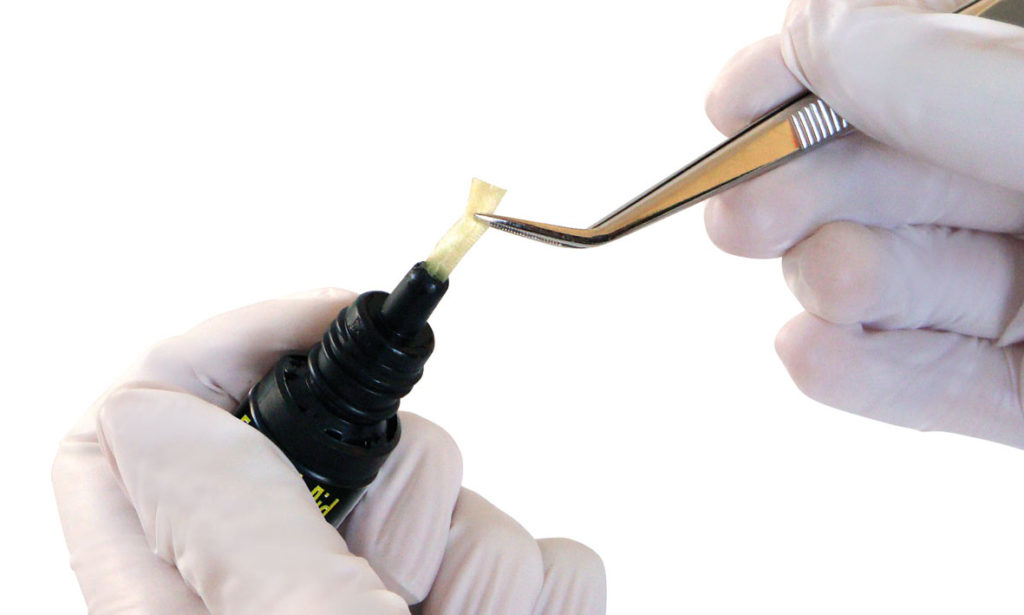 7. F-Splint-Aid Slim strip is pulled out from the light-protected storage bottle using tweezers. 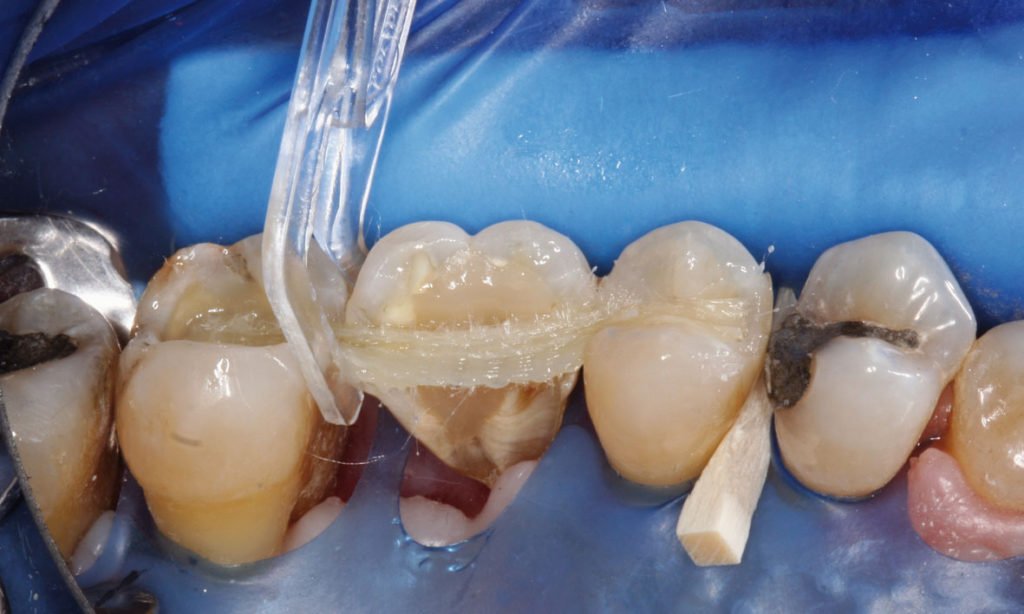 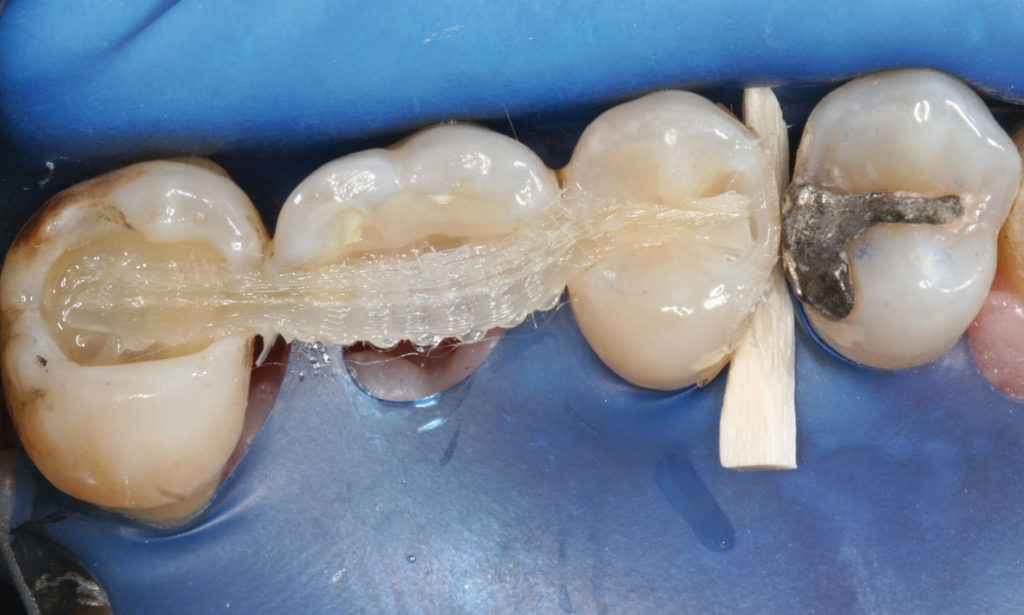 9. F-Splint-Aid Slim fiberglass ribbon is fixed with flow-composite in cavities of teeth 25-27. 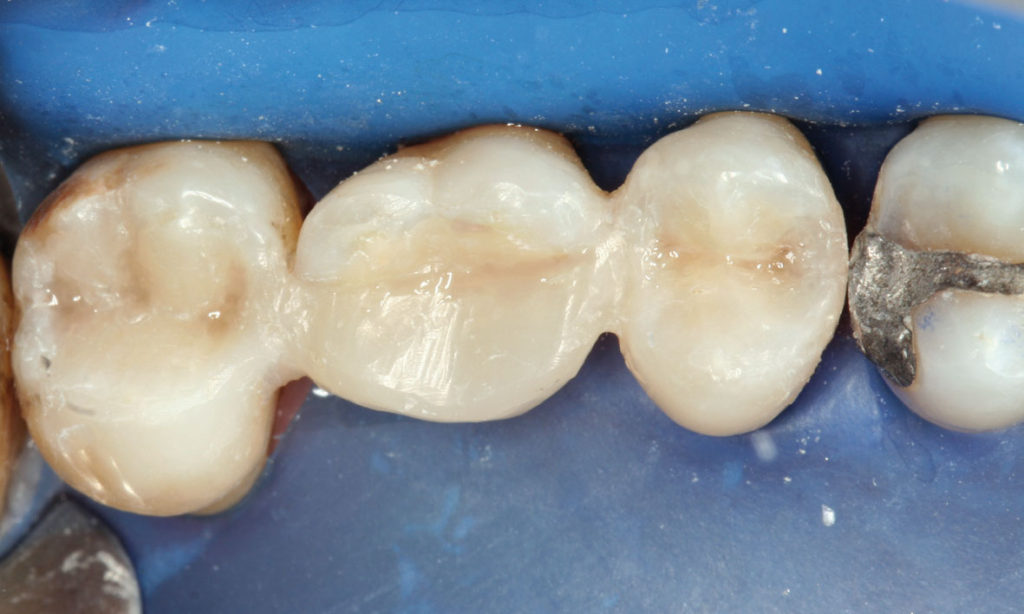 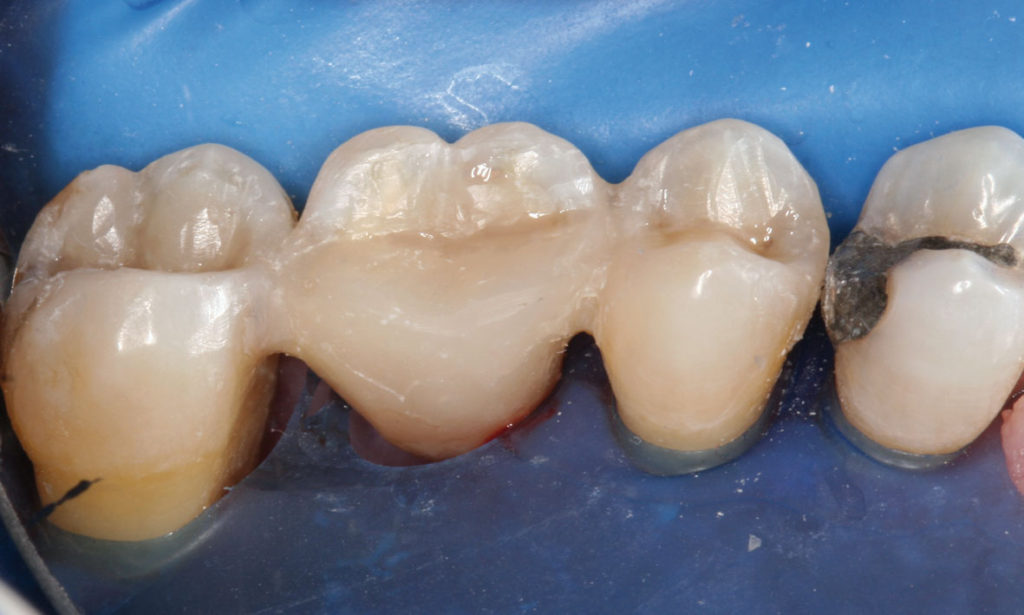 11. Palatinal view of the restored teeth after splinting with F-Splint-Aid Slim 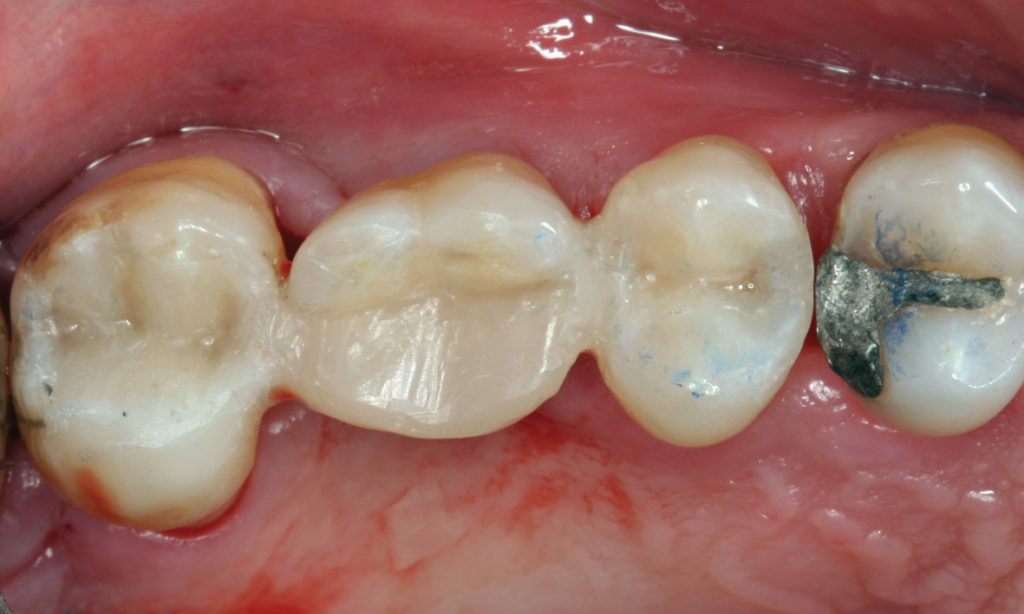 12. Occlusal view of the tooth splinting after removal of the rubber dam. 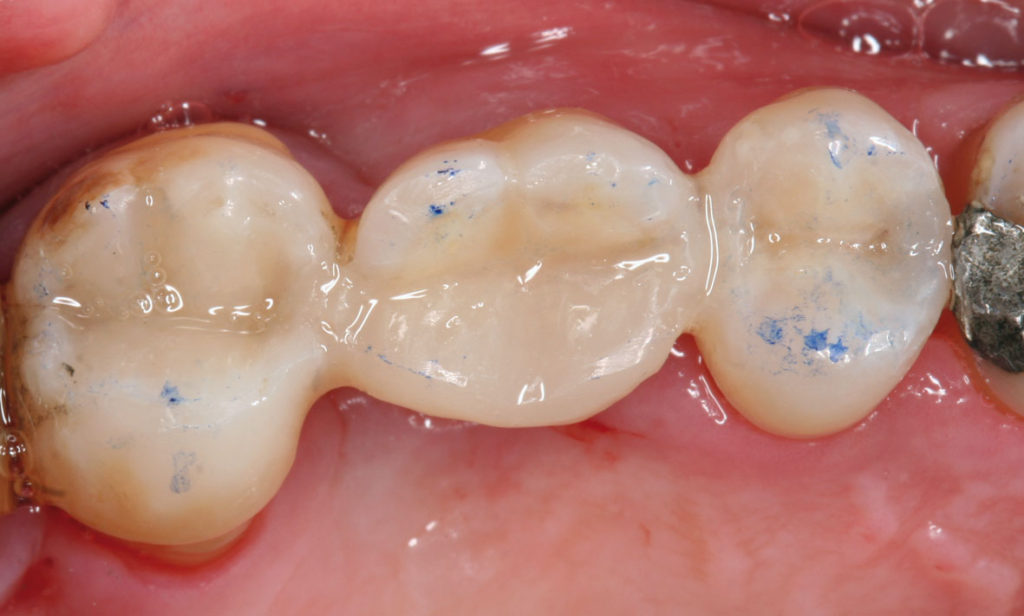 13. Contact points of the restored teeth marked by blue paper. Tooth 26 with reduced numbers of roots was designed with a reduced orovestibulary width with subsequent static contact on the buccal triangular tubers to prevent shearing forces. 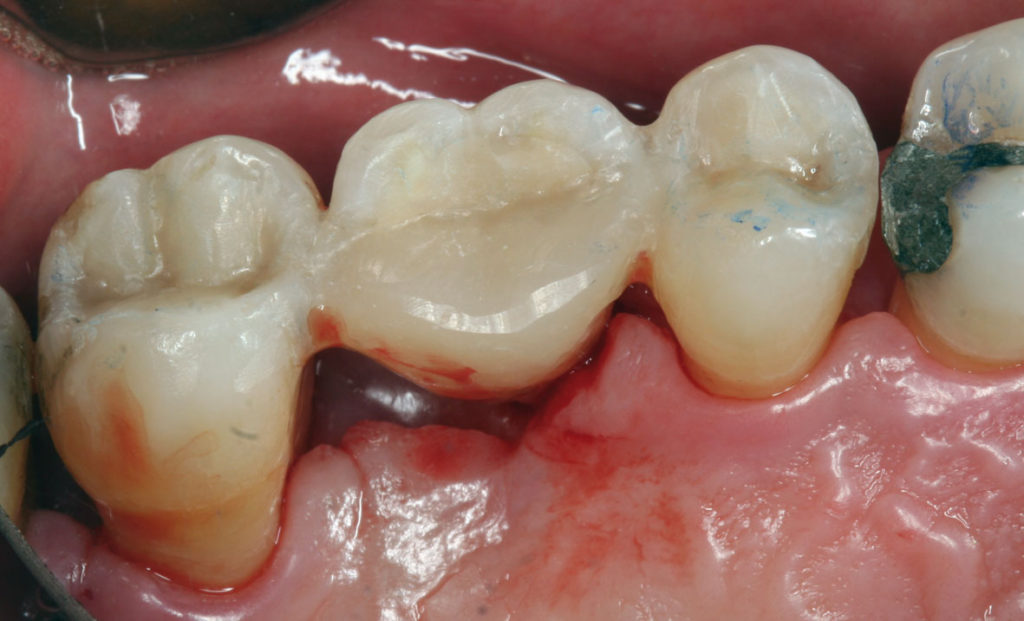 14. Palatinal view of the completed restorations. 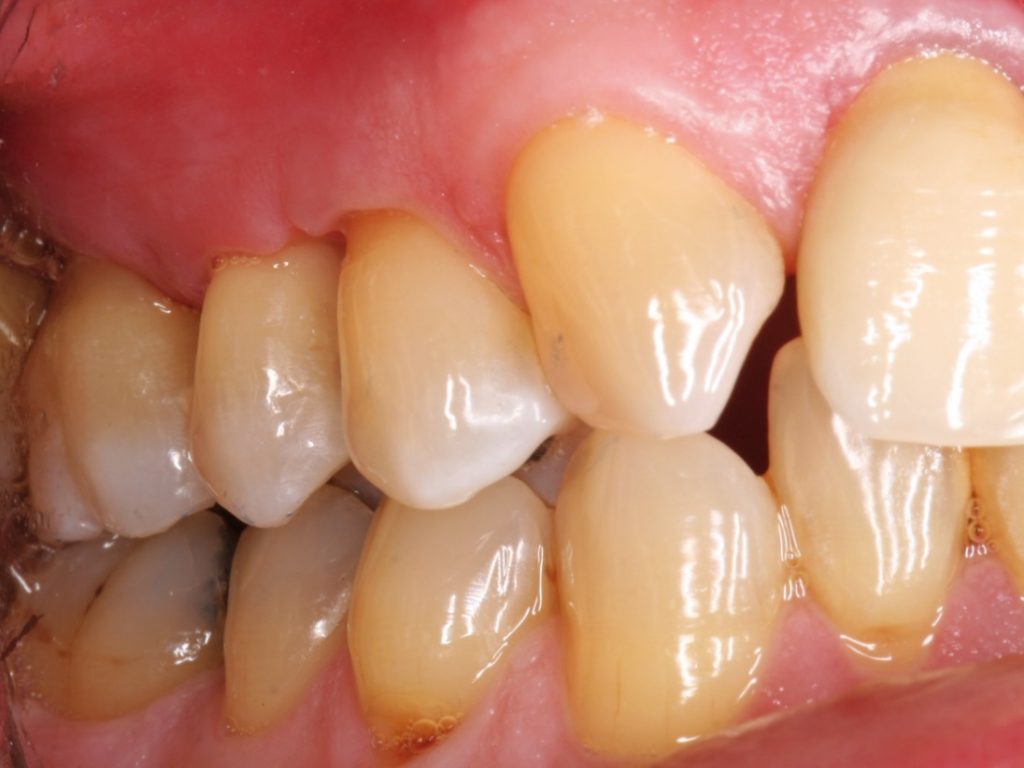 From my point of view, the biggest advantage of F-Splint-Aid Slim is the stable, woven structure of the splint material, as well as its practical light-proof packaging. Another advantage is offered by the included “Clip&Splint” autoclavable plastic application clips for fixing the splint materials to the teeth.